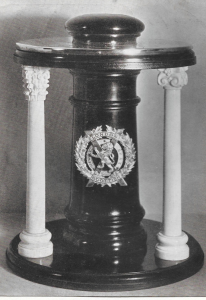 It is known that members of the Lodge saw active service in The Boer War. The Lodge’s first casualty of war was Bro. E.J. Liddiard, killed on 23rd February 1901 whilst serving with the Imperial Yeomanry (Scottish Sharpshooters). Bro. A.W. Buckingham gave his address in 1901 as ‘South Africa’. He was in fact commanding the service company attached to the Gordon Highlanders. He became Master of the Lodge in 1906. Bro Hamilton Gordon served as Armourer Sergeant with the London Scottish in South Africa and was awarded the DCM as well as being mentioned in despatches.

At the November meeting of the Lodge in 1914 the Secretary informed the Brethren that several members of the Lodge were now on active service with the 1st Bn London Scottish in France. The Battalion became the first Territorial Infantry unit to see action at Messines Ridge, 1st Battle of Ypres on 31st October/1st November 1914. He further informed the meeting that the Worshipful Master for the year, W.Bro Capt. T.H. Kidston Allsop, had been wounded in action at Messines on 31st October 1914 and was reported missing. The following January it became known that Capt. Kidston Allsop had in fact been taken prisoner and was confined in a fortress in Bavaria. 2 members of the Lodge fell at Messines: C.Sgt H.R.Aitchinson and L.Cpl J. Carey.

The London Scottish had purchased it’s own Vickers Machine Guns, the most advanced weapon of it’s kind at the time and in limited supply. These prized guns were knocked out by enemy mortars on 11th November 1914 during an enemy offensive along the whole front. The Machine Gun Officer, Lt. R G Ker-Gulland, and his Sgt, E.A Smart were both killed. They too were both members of the Lodge. The same W.Bro A.W. Buckingham who had led the Scottish in South Africa was killed on 17th November 1914 serving as a Major with the Gordon Highlanders.

Having being reinforced following the Battle of Messines the 1st Battalion was in action again in May 1915 at Neuve Chappelle. On 9th May 1915 they advanced on German positions in support of the Black Watch. Under sustained enemy artillery fire the attack was called off after heavy losses. Bro Lt J W Findlay was one of 50 London Scottish casualties in the action.

Bro Guy Ford had been an officer of the Regiment but resigned in 1905 to take up Holy Orders. Upon the outbreak of the war he re-joined the London Scottish as a non-combatant private soldier. On 13th October 1915, towards the end of the Battle of Loos, he was killed whilst performing the duties of stretcher-bearer. It was said of him that ‘as a stretcher-bearer he showed the same simplicity of character and devotion of duty which had characterised him as an officer’. He had been initiated into the Lodge together with his actual brother, Captain George Ford, who was severely wounded with the battalion at Givenchy in 1915. Capt. Ford finished the war as a Lt.Colonel and was awarded the OBE.

Captain William MacKinnon was killed during the Battle of Arras on 11th May 1917 during an operation to take an enemy trench. 3 companies of the 1st Bn London Scottish charged and over-ran the German trench and either killed or took prisoners those Germans that had not fled their position. Unfortunately in the darkness and confusion D Company overran their objective and Bro MacKinnon was one of 2 officers and several men cut down by machine-gun fire.

In all 10 members of the Lodge were killed fighting in the First World War.

Whilst not a member of the Regimental Lodge special mention must be given to Bro R E Cruickshank (St. Vedast Lodge No. 4033) who served with the 2nd Bn The London Scottish in Palestine during the First World War. For his actions and conspicuous bravery on 30th April 1918, during the Battle of El Haud where he was wounded 3 times, he was awarded the Victoria Cross. His name is amongst those commemorated on the memorial unveiled outside Freemasons Hall by the Grand Master HRH The Duke of Kent on 25th April 2017.

At the meeting of 20th November 1919 it is recorded that a cordial welcome was extended to Brethren returning from active service. It is noted that subscriptions for members on active service had been remitted by Resolution of the Lodge. To put the losses into perspective there had been a ceiling of 60 members in the Lodge prior to the war. In 1919 the membership stood at 51, thus the 10 lost represented a not inconsiderable percentage of Lodge members. Membership was soon boosted however by members of the Regiment returning from the war then joining the Lodge.

In 1921 the members of the Lodge contributed to the purchase of a fine ebony and ivory ‘Memorial Charity Box’ bearing the Regimental Badge and upon which the names of the fallen of the Lodge are engraved on the silver top. It is in use to this day. The Lodge was one of those contributing to the fund to mark the sacrifice of Masons during the Great War. Having raised the requisite sum in 1925 they qualified as a ‘Hall Stone Lodge’. To this day the ‘Hall Stone Jewel’ is worn proudly by the Worshipful Master in memory of those who made the supreme sacrifice.

Concerned with the threat of a Second World War the London Scottish raised a Second Battalion in 1938 and a Third in March 1939. Many of those joining the new Battalions also took the opportunity to join the Regimental Lodge.

A census of the Lodge taken in 1946 lists the wartime service of its members. In total 39 members had served in the Army, 1 in the Royal Navy and 4 in the RAF. In addition a further 30 members, being too old for active service and most having served in The Great War, also volunteered their services: 17 in the Home Guard, 5 in the Special Constabulary and 8 in Civil Defence Units. Amongst those who served were 2 Colonels, 6 Lt. Colonels, 7 Majors, 10 Captains, 3 Lieutenants as well as a Wing Commander and 2 Squadron Leaders. Members of the Lodge had been awarded 1 CBE, 2 OBE’s, 2 MBE’s, 2 MC’s and 5 had been mentioned in dispatches. 4 brethren had been killed on active service.

W.Bro Squadron Leader AJG Anderson died on active service in Egypt in 1941, he had been awarded the Order of the Nile and mentioned in despatches 3 times and had served with the Regiment in France in the First World War.

The relationship between the serving element of the London Scottish and the Regimental Lodge continues to this day. In more recent times members of the Lodge have served in Iraq and Afghanistan.

Each year at the Installation meeting in May the newly installed Master will call the Lodge to order whilst he reads out the 15 names on the Lodge ‘Roll of Honour’: