Members of the Lodge visiting the Somme Battlefields 2016

The London Scottish Rifles Volunteers had been formed in 1859 as part of the drive to raise volunteer rifles corps across the nation to stave off the perceived threat of invasion. The Regiment was formed by Lord Elcho, later the Earl of Wymess, who became the first Colonel of the Regiment. It solely recruited ex-patriot Scots living in the capital and their sons.

The Commanding Officer at the time of the formation of the Lodge was Col. Henry Lumsden who had succeeded Lord Elcho in 1878. Colonel Lumsden was a senior Freemason being the Provincial Grand Master of West Aberdeenshire. He had joined the Regiment upon its formation in 1859. It was intended that he should become the Lodge’s first Master, however, as he had not served as a Warden in an English Lodge, he was informed he was ineligible. Instead Capt. James Hepburn-Hastie became the inaugural Master with Col. Lumsden appointed the Senior Warden of the Lodge. Thus now eligible Col. Lumsden became the Master in 1890.

The Lodge was sponsored by the Royal Leopold Lodge (No. 1669) to which 2 of the founding members belonged. The Charter, dated 19th April 1889, was signed by the Grand Master, MWBro HRH Albert Edward, Prince of Wales, later King Edward 7th. The Lodge was consecrated in the Grand Mark Lodge Room, 8a Red Lion Square, London WC2 on Thursday 2nd May 1889.

In its formative years the Lodge drew its membership almost exclusively from the Regiment, either serving soldiers or those who had served. It soon flourished.

The formative years of the Lodge saw a very healthy period of growth and during it’s first 25 years initiated 90 members as well as welcoming 20 joining members in addition to the original 20 founding members. During its first 60 years Masters included 3 Colonels, 6 Majors and 10 Captains from the Regiment, one of whom held the Military Cross.

In 1911 it was decided to restrict membership to 60 members. The First World War had a profound effect on the Lodge with 10 members killed in action and many more seeing active service. [The Lodge at War is the subject of a separate article]. It should be noted that no new members were admitted into the Lodge between November 1913 and March 1915 and between July 1916 and January 1918.

With many soldiers returning from the War the Lodge soon increased it’s membership and prospered through the 20’s and 30’s.

The Lodge celebrated its 50th Anniversary with a special meeting at The Café Royal, Regent Street, London W1 on Thursday 18th May 1939. 50 members were in attendance and no less than 133 guests. The Worshipful Master in the Golden Jubilee year was W. Bro Dr LE Hall, LL.D, AGDC. Lance Hall and his brother Cecil had both served as Sergeants with the London Scottish Regiment in the First World War and had fought in the Regiment’s historic action at Messines Ridge on 31st October 1914 (Hallowe’en) when the Regiment became the first Territorial Army Infantry unit to engage the enemy. They were both initiated into the Lodge in 1924, Cecil becoming Worshipful Master in 1936.

The toast at the dinner was given by one of its more junior members, Bro MP Henderson, a Captain in the Regiment who had been initiated into the Lodge in 1936. Promoted to Major, ‘Hearty’ Henderson served with the London Scottish throughout the Second World War, winning the Military Cross in the Italian Campaign. He was the only member at the Golden Jubilee meeting who also attended the Centenary meeting of the Lodge 50 years later.

Following the Second World War the Lodge expanded considerably, welcoming many returning London Scots into its ranks. At the end of the war the Lodge had 74 members. By 1955 it had risen to 114 and then to 129 in 1963. From that high point membership of the Lodge began to decline, not least with the Territorial Army reorganisation of 1967 which saw the London Scottish lose it’s battalion status and become restricted in numbers to just company strength, thus considerably lessening the pool of future candidates. Therefore in 1973 it was decided, after much debate, to lift the restriction on membership from the Regiment and become an ‘open’ Lodge. 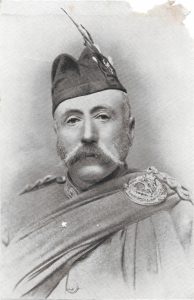 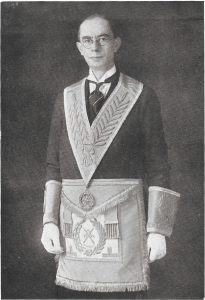 The Centenary of the Lodge was celebrated on the actual date of its formation with an Emergency Meeting by Dispensation in Freemasons Hall on 2nd May 1989. 40 members and 84 guests were present including a deputation from Grand Lodge.

The Lodge has met at various venues during its long history. Initially meeting at Mark Mason’s Hall, Great Queen St it moved to the Criterion, Piccadilly Circus in 1891 where it met for the next 35 years until 1926 when it moved to the Café Royal, Regent St. In 1969 it moved to the National Liberal Club, then to the Duke of Yorks HQ, Chelsea, the Café Royal (again) and then Freemasons Hall until moving, as a founding member, to the new Central London Masonic Centre at Clerkenwell Green, EC1 in 1979. It remained at the CLMC until its sale and closure as a Masonic centre in 2013. The Lodge then moved to the replacement centre in Lever Street, EC1 in January 2014 and upon that closure to Mumbai Square Restaurant, EC1 in January 2015. In November 2016 it moved again when it returned to Mark Masons Hall, now in St James St, SW1. The Lodge is now back in it’s historic home, The City of Westminster.

The Lodge has had many prominent members who achieved high status in civilian life as well as senior office in Freemasonry. Whilst too many to mention one member must be singled out, Alexander Fleming, the discover of penicillin. He had joined the London Scottish Regiment in 1900 and continued to serve in the ranks until the First World War when he was commissioned into the Royal Army Medical Corps. He was initiated into the Lodge on 16th March 1911. Whilst never Master of his mother Lodge he was to reach Masonic eminence as RWBro Sir Alexander Fleming the discoverer of penicillin . In 1948 he was elected an Honorary Member of the Lodge. He described his days with the London Scottish as the happiest in his life